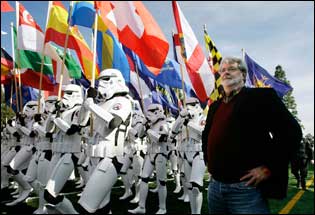 PASADENA, CA: After seeing Darth Vader lead two hundred storm troopers along Colorado Boulevard in yesterday's Rose Parade, President Bush decided to send them to Iraq. "I'm a war president. I make decisions here in the Oval Office in foreign-policy matters with war on my mind." Bush is convinced that white storm trooper uniforms are cooler in desert heat and have a powerful psychological impact. Vice President Cheney agreed. "Let's face it. Do we really want American soldiers running around in berets? That's French, damn it. No wonder everyone is talking about giving up. We need something that truly reflects our Force as we spread democracy to oil-rich nations."

Bush is reputedly also considering an executive order replacing "Hail to the Chief" with the "Star Wars Imperial March."
Posted by Bernie O'Hare at 1/02/2007 01:01:00 AM

That's hilarious! What's even funnier is I saw the News clip and remarked that Bush lives in such a fantasy world, he probably thinks thgey are real!

Unfortunetly, this may be closer to the truth than you intended. As noted on a number of "national" blogs, the BBC has reported on the forthcoming speech by King Bush. Based on info from some un-named, but high level source, Bush is going to call for an increase in troops in Iraq to help quell the insurgency. No additional training to bring the Iraqi army up to snuff. No discussions with the likes of Iran or others in the region. Etc....
In short, forget the ISG, don't listen to the Joint Chiefs, and screw the will of the vast majority of voters in this country.
The decider has decided to, now get this, change course (via a last desperate act to save face). What an asshole.
dg

I have the Sadam footage on my blog.

Spike, Who cares? Anybody who wants to see an execution can find that in numerous places, and Saddam's execution was on Drudge. Watching a human life get smothered is my idea of obscenity.

Well, someone has to show WHAT is a clear sign its time to go!

I mean what is left to do?

We have destroyed their infrustructor, alinated the population started civil war and now played god.

I'm for the free press, and BTW I see it as one down one to go.

First Sadam next the man who armed him Donald Rumsfeld!

Spike, Listen, you have the right to post what you want. It's your blog. But I'm bothered by the death penalty, even against evil tyrants. And no matter how one feels about the death penalty, few of us are impressed by snuff films. They're disgusting. It's bizarre, dude.

Most supporters of capitial punishment never have seen it take place. its a good hard lession in reality.

ALSO it shows we DID NOT bring democracy to Iraq, BUT a good ol'fashion KKK style lynching.

Its a grim reality veiw into what is WRONG with Iraq.

Its that Hunter S. thompson fan in me that does this.

Neo-clowns want to crow well look at what these bafoons are crowing about.

(BTW there have been a few bogus ones like one I found in a search that shows a Girls Gone wild tape, and one that dosnt show the actuall haning but is ment to scare the crap outta folks by not showing it.)

If Americans got ONE exicution shown LIVE on Cable, America would be like europe on the matter in 6 months.

OK Spike, I see your point. But as a person who has ALWAYS opposed the death penalty, even when I was a prosecutor, I'll take a pass.