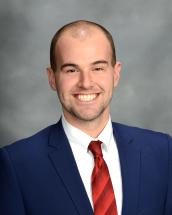 Brian Panella, who is associated with the Goudsouzian law firm, has been hired by Bethlehem City Council as their lawyer. Bethlehem already has Jack Spirk as a City Solicitor. The reason for a city council solicitor is because ideally, if not in practice, city council is a separate branch of government. Its views and agenda might differ at times from those of the Mayor.

Panella, a graduate of DeSales University and Widener University School of Law, has been practicing law since 2016. His father, Jack Panella, is a Superior Court Judge,

This appointment follows an executive session, which is specifically permitted for personnel matters. It nevertheless drew a vociferous objection from long-time City watchdog Steve Antalics. "This is not good government," he complained of the back door meeting. He warned Council members that they were starting their political careers "with a black mark against you."

Panella stated that "hard work ain't easy, but it's fair and honest." He indicated that most of his work is municipal. His law office serves several boroughs and townships as Solicitor.

He denied he was affiliated in any way with anyone on Council or in the City.

The appointment was adopted by a vote of 6-0.

City Council has one lawyer, but Mayor Willie Reynolds has four.  Solicitor Jack Spirk and the Mayor have appointed three part-time city solicitors to handle day-to-day legal issues that invariably arise. They will each have duty days.

These are all excellent attorneys.

In a less sanguine move, the City has hired Lehigh Valley With Love (LVWL) as a contracted communications office. I personally think Reynolds should handle his own propaganda. Willie told Council that outreach to Spanish-speaking City residents is parthetic, but I see no indication that LVWL's George Wacker has any deep knowledge of Spanish or even English, for that matter.

City Council is also accepting applications for a 7th member until January 25.

I’m curious, Bernie, how many solicitors and/or part-time lawyers have been employed by previous administrations? I know the Leeson family (father and both sons) held the position, but were they supported by other lawyers, as well? It appears that the new mayor likes to spend money (newly created positions prior to assuming office, five attorneys at his disposal) and my concern is that council will not counter him as it should, rather go along with whatever he wants. It is my hope that Council will act responsibly and appoint someone who may not be a “yes” person to that seventh position. Oh man, that last sentence made me laugh…what am
I thinking?!

George Wacker ran Reynolds social media for his recent campaign. Reynolds is just giving a little pay back to people who helped him. No big deal.

I am curious to see what the campaign donations are for these attorneys. I am not surprised that LV with Love/Whacker got a contract. Reynolds is rewarding all those who helped his campaign. He made his campaign manager the new DCED director. Rumor has it has Karner had to accept a demotion or be terminated. I've heard Darlene Heller also was demoted.

Great job attacking George Wacker's knowledge of Spanish and English while you type the word parthetic.

The Lehigh Valley with Love/Whacker hire is truly disgusting. I wonder what Janine Santoro and her office of "equity and inclusion" would think about Whacker's old articles when Lehigh Valley with Love first started as an even lower than bottom-feeding blog. Whacker often posted "Missed Connections" taken from various websites and then proceeded to comment on them with racist, xenophobic, and homophobic commentary. Of course, these were all scrubbed when Whacker became some reformed "media consultant." Surely, I cannot be the only one who remembers this!

More false empathy and leftism from J Willy. I have no problem with real leftists, but fake ones like the current mayor of Bethlehem and his pal racist Whacker are the worst. I hope there is someone out there who can access these old posts.

Hopefully this council is not a rubber stamp for the Bossman like th Northampton County Council.

@11:55 really? How about the husband/wife duo? Still on the payroll?

Elections have far reaching consequences. Gotta hold on to that pension Alicia!

Hey I’m not pretending to be a communication expert

I bet there were talks held at Mach's Gute. Cheers!

Do not forget the fact that four firefighter positions were cut. This political train has been chugging along, longer than people think.

Not sure about the solicitor, but the 2 assistants are part-time---or were part-time back in the day. So, Solicitor and 2 assistants has been typical for various administrations.

3:09 , If thats true, Someone needs to dig up Whackers old posts. How can he be employed by tax payers if that is true. The media needs to ask him if he made those old posts and if its true? If it is, he needs to resign immediately.

He's also been contracted by BASD for multiple years, which makes the fact people ignore his past actions even more deplorable. People should ask the School Board members about his past. I can assure you he has at least one buddy on the board who completely ignored his disgusting past and felt bad for him.

Why would you hire a guy fired by Discover Lehigh Valley to work for the city? What are his credentials? Creating a fake social media account mocking the mounted police, living in a car, and creating a shot at a bar mocking people eating chemicals? No wonder Easton is running laps around Bethlehem if this is the best they have to offer.

I always presume someone to be innocent until I see evidence that shows me otherwise. If someone has screen shots or other evidence then send it to Bernie. The regular papers will never report on it.

Are you asking about this Whacker guy?

Brian Panella will be an asset to the City Council in many areas. They're lucky to have him.