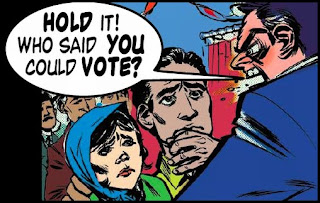 There's no doubt in my mind that the Republican-sponsored Voter ID law, which has been challenged in Commonwealth Court, is designed to suppress the vote. Don't have to take my word for it. House Majority Leader Mike Turzai has said so himself.

But Democrats are just as adept at suppressing the vote, when it serves their own political interests. Ohio's Democratic Party is challenging a law that gives members of the military an extra three days to vote in this year's Presidential race.

A pox on both their houses.

Updated 11:30 AM: Hoodwinked! - Unfortunately, I relied on distortions. According to The Hill, the lawsuit is designed to restore three days of early voting for everyone.  I thank my readers for pointing this out. I have nothing against bias, but believe we all have an obligation to be as accurate as possible.
Posted by Bernie O'Hare at 8/03/2012 08:31:00 AM

Equivocating the two is insulting to our military. The military is not attempting to vote illegally.

Why does the military need an extra 3 days? In the instant on news cycles, polls are counted and predicted the minute they close. Giving any group more days, means they can influence the election, with knowing the likely results.

Why not give the military 2 months BEFORE the election to vote (in person or via absentee ballot)?

Also, illegal aliens are not eligible, regardless of ID (or lack of).

Why wouldn't the general public also get an extra three days? Doesn't make sense to do it only for the military. More voting days for everyone! How about Election Month?

"Equivocating the two is insulting to our military. "

The Democratic party shows again its disdain for those who serve in the armed forces.

A less biased account of the lawsuit. Prior to action in the Republican legislature, all Ohioans had the right to vote on those days.

When I served in the U.S. Navy, there were times our ship didn't hit port for almost two weeks at a clip. We spent six months at a shot in the Mediterranean Sea. Our mail was always waiting when we got into port. Yes there were times we got mailed delivered by another ship, especially when we were operating with the Air craft carriers. However your mail was always quite slow. I don't think giving a service man or woman a three day lee-way on their ballot (when serving outside our country) is too much to ask, and I'm a life long democrat and a U.S.Navy Veteran.

"Voter ID, which is gonna allow Governor Romney to win the state of Pennsylvania, done," he said, drawing applause."

Where, anywhere in the comment, does he say "this law is designed to suppress the vote"?

At best, yours is a very liberal interpretation of Turzai's statement.

I doubt that you would spin a democrat stating "Gay Marriage Act, which will allow same sex marriage, done," when addressing the Democrat State Committee, as a suppression of the values who would oppose such unions.

Turzai said "allow" not guarantee or deliver. A more level playing field. No more dead people, illegals or apathetics who won't vote unless a union, ACORN or other special interest tells them who to vote for, pays them and drives them to the polling place and back.

This lawsuit seeks to restore voting rights. Voting rights restricted by the law passed by the Ohio Republicans. How do you justify your so-called centrist designation with such a biased report?

I don't. I was unaware the report was biased, Jim, and just saw the Hill account. It is more neutral.

You were unaware of the bias of a report from Breitbart?
Naïveté is unattractive in a man your age.

Neither are shoes without socks!

Yeah, I blew this one.

As I stated on your earlier post, the GOP Commonwealth has signed the stipulation acknowledging they have no knowledge of or evidence of voting fraud in PA, or anywhere else. Turzai's (oops did I say that) comments were really just confirming what was a pretty obvious plan for a party of the numerical minority. 1.) gerrymander congressional districts to favor GOP--as both parties have been known to do, 2.) then further tried to peg PA's electoral college votes to the winner of those gerrymandered districts, until that plan backfired, and 3.) voter ID, which is reasonable on its face if it wasn't for the reason WHY the solution in search of a non-existant problem--suppress votes.

While both parties where trying to play the system, which was sounds more "democratic": trying make it harder to vote, or trying to make it more accessible to vote?

Gotta have an ID to drive.

Gotta have an ID to walk into a bar.

Gotta have an ID to get on an airplane.

Gotta have an ID to do this, to do that.

Don't gotta have an ID to vote.

Makes perfect sense to me, but then again I am an Conservative - which makes me a stupid idiot waiting for Fox News to tell me what to say.

Meanwhile, I wonder if a prospective ice hockey fan will need an ID to write a check to the Brooks Brothers for season tickets to Chairman Pawlowski's record-smashing Palace of Sport?

Any voting after results are announced would rob this country of fair elections. Remeber the circus in Flordia? Imagine what it would be like overseas.

Voting after results are announed should be considered Fraud, not suppresss no matter what group it is.

Imagine what would happen in some of our local races which are decided by a few votes.

Execercise you right BEFORE the results are announced.

Do people with medical emergencies on Election Day get an extra 3 days?

The whole Ohio debate is about their "early" voting, that is done by election day. This is not an extra three days post election day.

anonn 9:47 has a point. No
Democrat has ever served in the military of the United States. Thank you sir for supporting our cause!

OH Sec. of State website: "Ohio voters may also cast absentee ballots in person prior to Election Day through their local county board of elections. For the vast majority of voters, the early in-person voting period begins 35 days before the day of an election and ends at 6 p.m. the Friday before the election."

One does not need to give a reason, just fill out the application for absentee ballot. You may recall in 2008 that a number of states (I read 34 states) did allow "early voting". It is one way to make voting more accessible, rather than the traditional "one day only" election.

Uniformed and Overseas Citizens Absentee Voting Act: "By U.S. Mail: The return envelope containing your marked ballot must be submitted for mailing no later than 12:01 a.m. on Election Day and received by the board of elections no later than 10 days after the election"

So again, to the comments above, no one is voting after projected election results are already reported.

How is it that asking for ID amounts to voter suppression? If people are able to register to vote in the first place they should be able to produce ID at the polls to prove their identity. Is this really too much to ask? What other country would allow one to cast a ballot without providing basic ID? My guess is none.
Bernie, I have "watched" the polls in Allentown on presidential elections,and I recommend anyone who doubts the need for basic ID requirements to do the same.It is an eye opener on the subject of voter fraud.
Sorry to jump into this discussion so late, very busy.

Scott, Let me give you an example. Nursing homes are full of seniors whose IDS have long ago expired. Yet as I'm sure you know as a school board member, many of them still vote. They will lose that right this November unless the law is suspended or they get iD.

Ar Gracedale, I know efforts are being made to help residents get ID. But I doubt this issue is even on the radar at most facilities.

That's just one example. I know that yo would drive these people yourself to help them get an ID. But most off them don't even know they need one.

Right wing creep negates the service of untold numbers of servicemen & women, straight,gay, other,democrats,socialists,independents
,other ----- who served,fought and died for this great country.
My true response to this ass would not be fit to post.

Many in nursing homes are assisted with their voting,

My father with Alzheimer's is not of clear mind to vote, is it proper for me or anyone else to assist him to vote?

No. But those who are of sound mind should not be deprived of their basic riht to vote simply bc they lack ID.

Ds buy votes with handouts and have a strong interest in protecting the votes of noncontributors. Rs have a strong interest in keeping Ds from suppressing the votes of contributors. Rs are losing, as contributors are now outnumbered by those in the hammock. We are Greece. When Barack O'Carter said we needed to spread the wealth around, he meant to say spread the misery around. He's been remarkably successful in this regard. He's also gotten his handicap under 20, although some say he shouldn't take credit because he didn't do that.

If they vote at the polls, they probably DO know they need one.

Seniors are disproportionately super voters and are usually registered to a party.

No one will deny that the new law will present some challenges, but for every problem we can find a workable solution. The integrity of one person one vote is at stake here. It is a fact that people in some urban nursing homes are voting in mass while their families wonder who is casting the vote for them.
Bernie, Google voter fraud, it is very real and voter ID is needed to insure integrity.
And please get a poll watcher certificate for a downtown Allentown poll this November.

Where exactly is this Nursing Home fraud going on Scott?
Bulkshit and you know it, Your smarter than that man,don't stoop that low.

I'm not sure the extra voting days is for 'voting.' Rather it is for the delivery of votes from overseas.

Wow! this took me 10 seconds to find.

Interesting link, Scott. At Gracedale, the polling place is right there at the facility, so there is no need for absentees.

and I am sure the good people who work there can do their due diligence and provide the residents with proper ID before the the November election.

They're workin' on it. But there are other nursing homes, and I don't know that anyone there really is aware of these changes.

It is presumptuous to assume that all residents of Gracedale changed their official residence with voter registration, hence a justification for absentee ballot.

BTW, I was told by a member of the NRA that absentee ballot request forms are sent out to some members without solicitation. Is this true?

It's true! Tens of thousands of Alzheimers patients and elderly are tricked or coerced into voting for democrats in Pa. every election.
This outrage must end.
Thank you for your vigilance Scott.

A true case of a solution in search of a problem. What will the New Republican Party do in order to win an election? Anything it takes.

Hey why not go back to the original rules of only allowing white males that own property to vote.

How does the term Pres. Rommney sit with you, now?