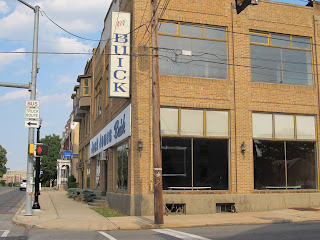 At a brief meeting on July 12, Bethlehem Planners approved the demolition of Jack Jones Buick, located at 235 West Broad Street, for a 3-story, 17,040 sq. ft. medical office building. They also signed off on designs for a 34-car parking lot at nearby 532 4th Avenue.

Owner Ed Novak is hopeful that the new facility, estimated to cost around $5 million, will be completed by next June.

The only concern with the plan, expressed by City Engineer Matt Dorner, is that the landscaping proposed for the medical office building will encroach slightly into the sidewalk right-of way.

"Couldn't the building be a little smaller?" asked Dorner.

Novak's engineer, Bryan Ritter of Jena Engineering, answered that such an adjustment would eliminate at least eight parking places. Darlene Heller, the City's planning Director, added that her department asked Jones to move the building as close to the street as possible, calling it the "urban style of development you've historically seen at that site." She noted that Jones was in a "Catch 22" situation, getting criticized by one department for doing exactly what another department had recommended.

Heller called the proposed medical facility, located near the Route 378 entrance to the
City, a "gateway building." That refrain was echoed throughout the hearing.

Although Planners Jim Fiorentino, Rob Melosky and Olga Negron gave Novak's plans a green light, he still needs approval from the Zoning Hearing Board at their August 7 meeting. Zoners are waiting for City Council to approve a new zoning ordinance.
Posted by Bernie O'Hare at 7/13/2012 12:46:00 AM

A great building from my youth. Gone!
I can remember wondering in the mid-fifties--- how did those gleaming pieces of Detroit iron get up there in those windows.
It was fabulous!

now the poor, homeless and wretched will line up around the building waiting for their nobomacare.

I hope they save those wonderful signs

Allentowns king palumpa and crew created a new fad for other lehighvalley cities? See who can build the biggest Brown Hole on a main thourghfair, and the compatition is on?

Bethlehem has funding in place before they dig

Another developer, another contributor to the Callahan political machine. This guy is even outdoing his mentor big Don Cunningham, in piling up political cash.