O'Hare's WWII Diary: A Final Glimpse at a Time When We Were "Prima" 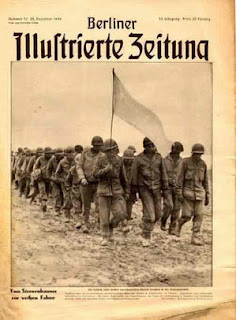 These are the final entries from my dad's brief writing career, a diary which he started almost immediately after being released as a German POW. My father was a complicated man, and I considered him a cold bastard much of the time. These diaries, and some other letters he wrote to his own "mommy and daddy," opened my eyes in many ways.

I wish I had been a better son.

In addition to the personal impact, these diaries provide a brief glimpse into that greatest generation. Like my father, most WWII vets share very little about the sacrifices they made when the entire world needed them. Sadly, a thousand of them die daily, and with them the memory of a time when Americans were considered "prima."

My lazy senses responded sluggishly to the blare of a bugle that had commenced blowing about 5:30 this morning. Some character dramatically announced that it would be appreciated if everyone fell out. A true count was needed due to the fact that today had been chosen as 'the day' by the powers that be. I did not fall out. Soon after we drew rations and packed. At 11:30 we fell out, were issued cigarettes and were given cigars by the Russkies. Then, after waiting for the usual period, we marched to the exchange lot. As is usual in all these matters nothing went as scheduled. We waited in the exchange lot for almost three hours during which it rained most of the time. The trucks finally arrived and we loaded and were off.

Vonnegut, Dannine and I were lucky enough to get a civilian bus instead of a G.I. truck. Kruse, Jones, Coyle, Watson and Burns also piled into a civilian bus but unfortunately not the same one. After three hours rolled around we arrived in Halle. According to the authorities we will be here three days at the most waiting to be flown via C-47 to LeHavre, France.

I have just digested my first Army food in 6 months - '5 in one' rations consisting of ham and sweet spuds, cheese, crackers, pineapple, rice pudding cigarettes and chocolate. How amazed the limeys were when we told them that the above was for one meal and not one day! We got separated from Jones, Kruse, Coyle, Watson and Burns.

Awoke, washed and drew more '5 in 1' rations of the same unsurpassed American caliber. Before much of the day had passed we moved to a new area of camp. They are separating the English and Americans. I wish they had done that six months ago. Spent the rest of the day on my lazy back reading.

Routine day. I showered, deloused, read, ate and am about to turn in. Red Cross Clubmobile presented itself and I basked in about six doughnuts and a cup of real coffee. Prima.

I have deleted two comments from someone who claims I can still e saved. That's nice. Stick to the topic please.

Thanks for posting these again, Bernie. Born well after this era, but often wonder what happened to the "can do" American persona. Reading about how your dad had his first 5 in 1 and relished the meal is particularly poignant.

Don't beat yourself up about the past. From what I have read through your posts, your a proud grandfather who tries to stay involved in their lives. Have a great Holiday.

I've so enjoyed these posts. The elegant simplicity of the entries is especially touching. Thank you for sharing your treasure.

As a vet, I can understand and really appreciate your Dad's diary. Bern you're a lucky man to have such a euridite (?) father. Don't know if you met your father's friend Vanagaut (?) but if you did, I eny you. I really enjoy his writing.

They gave their today, for our Tommorrow.

Your Father and other fine men and women built America and saved the World.

Merry Christmas Bernie, not Happy Holidays, I like it best the good ole fashioned way, thanks for the memories, Carol

Thanks Carol. Hope you enjoy your Christmas, too.

very interesting reading love it ! two fine men we owe a debt of gratitude to !

Bernie,
Yes 5:51 summed it up in one fine sentence, and you putting your fathers writtings in redd make it all the more important! As a child a father is not only looked up to as a protector there is many other attributes that seem to have sprung up in our older years!
Thanx for sharing these family archives with people at this time of year when all different venues are needed. There is a new theme in the wording of your fathers writtings that Vongent couldn't write upon his returning home, from Clint Eastwood's Grand Torino, It's What They Don't Tell You To Do!"
So hoping soon to be reading opinions in your articles in the comming year.
REpublican redd
humanist by design

I love how he casually and admiringly calls the Brits limeys. My dad's long gone. He rarely spoke of his time at war. When he did, it was chilling and somber. But it's a real treat to read this diary and see the time through which he struggled through the eyes and words of another with a similar experience. Your dad's self deprecating Irish humor is a riot and an inspiration. All generations who served and serve are the greatest. I'm struck by the kids today who volunteered to do what they do. Thanks again, Bernie. Merry Christmas.

"How amazed the limeys were when we told them that the above was for one meal and not one day!" --- "They are separating the English and Americans. I wish they had done that six months ago."

The contention between the Americans and British went both ways, as the Brit's would say of the 3 things wrong with the Americans; They were overfeed, oversexed, and over here.

I remember stories mum would tell about the shortages of food on the isle, it was dismal, fresh fruit was none existent, she hadn't had a bite since '39 when she enlisted. She helped with the search lights a favorite target for strafing, during the blitz she was and hit by a strafing Messerschmitt in the leg, I seen the scar...mum was unbreakable. Cancer finally did what the Jerry's couldn't.

When the war was over all she wanted was a banana, I have a picture of dad presenting her with a full bunch stateside, we referred to the whole thing as the banana story. I think of it every time I pass the bananas at the market and see that they're .11 cents a pound.

Love your story. Thanks. The rivalry between Americans and the Brits continued when I was in the service.

Just want to say have a great holiday season. Keep up the good work. As far as your blog I miss the police blotter. And stories I might not like for whatever reason, are still factual. Thanks Bernie.

Bernie I loved the stories about your Dad and I was enthralled. If only we had that caliber of
men today. Please keep up the great work I never miss your blog/You are a greatgrandfather too.I hope you spend the days with love ones. Have a great Holiday and God Bless you
Peace SW

The "Greatest Generation" is no exaggeration. I salute all who served in defense of freedom especially those who gave their lives for this country. Those vet's are slowly but surely passing on but we do have their heroic stories..forever. God bless.

B..
Totally agree with 551.
Ive enjoyed your posts and your insight.
Keep it up.i

Thanks and Merry Christmas!

The "Greatest" Gen bred and reared "Boomers" therefore they cannot be that great, DUCY?

Bernie, I also agree with 551am. Merry Christmas, hope you have a great holiday.

Allentown's Sewards Steak shop owner, Mike, is passionate about recording these veterans before they are gone.
http://www.lvveteranshistory.org/index.html