O'Hare's WWII Diary: "We are Being Looked After Like Pet Children by the Russians" 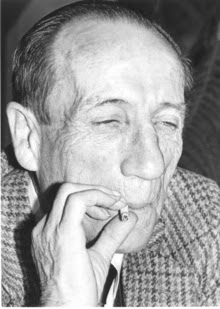 Writer Kurt Vonnegut's letter home, written soon after his release from a POW camp, was published here yesterday*. Believe it or not, my dad was the real writer back then - he even kept a diary for an entire week.

Unlike Vonnegut, he sheds no light on what had actually happened to him as a POW. He provides no explanation about his weight going from 150 lbs. before the war to 80 lbs. as Adolph's guest. Mum's the word. He'd stay like that the rest of his life. Vonnegut's three-page letter tells me more about my dad's POW experience than he himself ever shared.

He just drank. A lot. Especially at Christmas time. That didn't kill him. Neither did the Germans. The cigarettes did.

But for one week, my father chronicled his post-release experiences in amazing detail. Just twenty-two at the time, he was a pretty good writer himself. Occasionally, he mentions Vonnegut, who was just a "minor being" at the time. For the next few days, I'll share my dad's thoughts with you, day by day.

Our mangy but well-fed crew left DiHille's at noon today. We proceeded over the Elbe to Russian headquarters in the city and after much confusion - due to our ignorance of the Russian language and vice versa - we were directed to the Hitler Caserne on Konigsbage Strasse. Here we find ourselves confronted with the perpetual situation of no one knowing anything about anything. However, we are being looked after like pet children by the Russians. We have been here only four hours at the most and have already been fed twice, showered, de-loused and billeted. As near as we can gather from speaking to the limeys and G.I.'s here, we are to stay put until our troops come seeking us. Except for the anxiety that we all have concerning our parents and families, we don't give a damn how long it takes them to root us out.

I heard my first radio program since I was captured. Dannine and I went across the compound and fell in with a few Tommies who have a wireless set in their flat. We heard an A.M.G. broadcast from Hamburg. That American music certainly sounded good. The Tommies surprised us before the evening was over with a meal of spuds, meat and beans. We rejoined our crew with a full stomach and a highly satisfied mien. I don't believe I'll ever get up out of bed again. Goot nacht.
*) Vonnegut's letter home will be published here on Christmas Eve,
Posted by Bernie O'Hare at 12/20/2021 12:01:00 AM

thanks for sharing his diary, but also your comments about your father. to me these kinds of revelations connect us all, and transcend any political differences. rendell, cunningham, pawlowski, dent and angle are just temporary tenants in a public office building

Thank you for posting this. As graduation rears its ugly head and I am struggling through my own pathetic quarter-life crisis, it's nice to catch a glimpse in to my genetic make-up. I hope all is well, and your holiday season is at least somewhat less stressful than a beleaguered law student's.

pat. good luck in your exams and I'll see you and john at Christmastime here in the east

That little bastard has a blog, too. I'm complaining to his dean.

Bernie, your dad was a true veteran. Just like my dad, many veterans would spend their lives never speaking of the war exept for just a few words. The horrors they saw and lived through cannot be discribebed in just words.

Thank you for sharing this every year.

What amazes me is the humility, dry humor, and nonchalance with which these great men were heroes.

And then, as if that weren't enough, they came home and built the most powerful nation and economy the world has ever known.

These are the best posts you make, year after year. Although we disagree on every thing, I appreciate these. Hope we have the next three or for more to come. Merry Christmas, Mr. O'Hare!