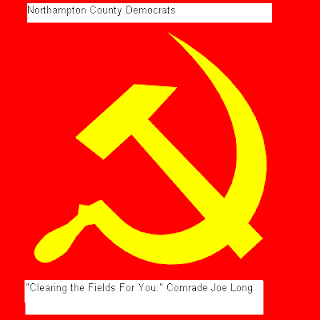 Last week, I attended a John Stoffa news conference. I posted a brief, and factually accurate, story, almost immediately after he announced that the next election will be conducted with lever machines. But I decided to post a second report, the very next day, to explain how I ended up in the county exec's office in the first place. It was pretty much an accident.

This second blog, charitably called "irreverent" by both Blue Coyote and LVPoliblog, is an attempt, good or bad, at gonzo journalism. It is a highly subjective first person account, although my claims about that TV reporter are right on the money, bippy. She's warm for my form.
Can you blame her?

I thought my story might annoy her husband. It didn't, but I still managed to piss someone off - Joe Long. He thinks he's very important. He signs letters like this:

Impressive, huh? On Saturday, Express Times Editor Joe Owens blogged that Bossman Long "has a target" on my back.

Well, Long's mostly angry at Stoffa, not me, for "inviting" a "blogger who has no credibility in this county. (Check his record)." Stoffa must "cease and desist."

Is it me? I always thought Democratic party chairs exist to ensure that Democrats seek and retain public office. Does he outrank our Democratic county exec? Where does he get the authority to issue stop orders? Can he impose his union thug notion of government, which consists mostly of threats and decisions made in smoke-filled back rooms, upon democratically elected officials?

Bloggers and Express Times Editor Joe Owens have some answers.

LVPoliblog: "The people's business needs to be done in public. We can't exclude people from press conferences, or government meetings for that matter, just because we think we aren't going to like their perspective on it. Whether you agree with those in government or not, you can't issue a proclamation that any dissenting opinions, or in the case of this particular blog post by O'Hare, an irreverent one, be stifled by the subtle but dangerous shadow of government censorship. Trying to control who can come to government gatherings breaks that threshold."

Express Times Editor Joe Owens: "No matter how self-important we news-gatherers may like to be, we're really just information providers. O'Hare is in a similar category, whether Long likes it or not. Unless it's an invitation-only event, O'Hare is free to show up and write whatever he likes, crazy ramblings or not."

Owens does doubt my claim that the TV reporter was eyeing me with bedroom eyes. "The author's mug shot on O'Hare's Web site should settle that argument." That's why he's an editor and I'm a blogger.

I'm very impressed that the MSM would defend a form of alternative media at a news conference, especially when that alternative is me.

Later this week, I'll have a few things to say about Bossman Long and his pals in the local Democratic party. For now, I just want to thank him for increasing public awareness about the blogosphere. Thanks, Bossman!
Posted by Bernie O'Hare at 8/27/2007 12:30:00 AM

Joe Long is the best party chair we ever had. Just ask him.

Agree! "Anyone" can attend a news conference open to the public and impart to others their opinion. What if I had attended and started telling folks my opinion of what went on? God forbid Joe Long would end up in the loop and disagree with my opinion of that news. Hope I wouldn't get a cease and desist letter from him! If I did, I would tell him what to do with it! Boss Long has no clue what public service means! Also, his letter to Exec. Stoffa, which never should have been written, is factually incorrect. This is America last I heard! larry@kisslinger.com

I wonder if Long is planning on making a statement after pissing off... well... just about everyone!

Joe is the reason the Dems have to appoint his people to office. They can't get elected even in a Democratic County.

Joe Long is the worst thing to happen to NorthCo Dems since...oh, I don't know, the year 1994? The man is an utter disgrace.

Why doesn't TJ Rooney lower the boom on this guy? He's an embarrassment.

Bernie, you misguided troll. I hope we do not waste to much time or energy on Joe Long. Many including Larry K, know Long is a big blow bag who has tried to bully many past and present Dem's. Most just ignore him.
Now to the point, of course the msm supported you on this issue. One, it makes His Holiness Pope Stoffa I, look even more like the child of Abe Lincoln and Holy Mary. It also vilifies Joe Long who is just too easy to attack. Shooting fish in a barrel is hard compared to nailing this tuna.
BO, as long as the song is pleasing to their ears, ego bloated media types like Joe 'I'm smart' Owens will praise bloggers like yourself. Lets see their reaction when you take on one of their pet causes or politicos. Until then I will reserve judgement.

Damn, you're tough. You're way too tough on the MSM. I've disagreed w/ them many times, and they don't hold it against me personally. Can't you even acknowledge that maybe, just maybe, Stoffa made the right call? And I'm impressed that the MSM would go out of its way to defend bloggers. Owens did it precisely because he is not a self-important blowhard. Bill White just did it too.

How appropriate, the hammer and sickle. NorCo is a one party operation with token opposition that would screw up sleeves on a vest. Dems run the show and the only real political struggle is for control of the party. As a local left-leaning gadfly and blogger, Bernie, you're a threat. But no worries, NorCo Dems will continue to control the show and call the shots - which gives you nothing to do but parse the party line as if a real controversy is taking place. Oh the promise of the bloggosphere delivered right here in Nazareth!

That being said, nobody should be kept out of news conferences. I want multiple views of the latest "5-Year Plan" from the Kourthouse Komplex. I don't trust you anymore than local brain-surgeon/rocket scientist, Joe "my staff made a mistake by relying on Microsoft spell check/thesaurus" Owens. And that's exactly the point.

You and I are basically on the same page, although I would not take those shots at the MSM. But you're right. It's best to glean your information from several different sources. There are, after all, four different versions of the New Testament. There's no reason you should trust me or any one source.

But you're wrong about one thing. The days of machine politics in NC are coming to end, effective May '08.

In May '08, candidates for the Dem committee will be elected. Long is going to see a lot of new faces, but not for long.

Joe Long. HMMMM. He is probably still upset that his Boy Wonder, Mike Fleck lost in the primary. Now, he will never control the operations in Easton. Can you believe that Joe was out raising money for him just as he is for Scam Bennett. I think Mighty Joes days are numbered. He won't be the chair for long. Joe, are you out there??????? Why are you supporting candidates in the Primary???????? Why do you choose the candidates that embarass the entire party....continually. Why the hell would you publicly support Mike Fleck and Scam Bennett in Easton. What is your problem?

How can anybody say one party contols Northampton County. Republican Executive 94-98. Republican controlled Council 2002-06. The only reason the Repub.'s lost Council was because of their own bumbling and arrogance on Council. The current Executive recruited by Republicans, supported with Republican money and helprd by Republican party operatives. Whats that line about if it walks like a duck, Quacks like a duck.
Fact is the Dem's have no lock on the County anymore and if Repubublicans lose now, with the new influx of Republicans from NY and NJ, its due to their own ineptitude.
The press does not fear local bloggers, why would they? Print media has been losing readers for over forty years. Was it nice of Stoffa to invite you, yes of course it was. He also knows you worship the earth he walks on. For the next two and a half years watching you , Stoffa, Joe Owens, Bill White and Ron Angle is akin to watching a gay porn film gone hporribly wrong.

Dude, I've mentioned this a few times now, but I was never really "invited" to that press conference. I was basically tolerated.

So Stoffa's a Republican? That must be why he supported Dertinger's congressional bid and invited him to speak at his home.