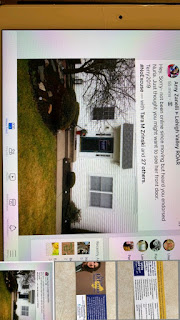 Last week, I published a photo from a Facebook page showing a Trump-Pence campaign sign at Nuria DiLuzio's home. When you're seeking the Democratic nomination for NorCo District Attorney and just switched parties, as she did, this can and does bother people. What bothers me far more than the sign are the conflicting accounts DiLuzio has given..

Story #1.- Celeste Dee is DiLuzio's former campaign manager. When Dee was first informed that DiLuzio had decorated her home with a Trump-Pence campaign sign, she contacted the candidate. DiLuzio denied it. She told Dee that campaign signs of any kind are prohibited by the homeowners' association in their development.

Then a picture of the sign surfaced, establishing that what DiLuzio said to Dee is inaccurate. This is why Dee decided to part ways with DiLuzio, who then falsely claimed to have fired her. 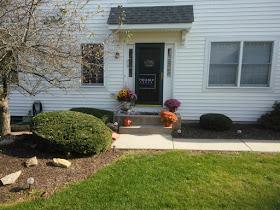 Story #2. - In a conversation with me concerning the campaign sign, DiLuzio admitted that one had been placed at her front door. (Her front door actually faces her next door neighbor, and not the street.) According to DiLuzio, it was only there one or days, and then was taken down. She told me it was done mostly to taunt her next door neighbor, an ardent Hillary supporter.

Over the weekend, I obtained a second photo of a Trump-Pence sign at DiLuzio's front door. If you take a close look at it, you can see that  there are mums on the porch and flowers on a tree. This picture was obviously taken in autumn, around the time of the election.

Compare the second photo with the first. You'll notice the tree is bare in the first photo.Also, the porch is adorned with with an evergreen instead of mums. The second photo was taken at a different time of the year, most likely winter.

The second photo demonstrates that, contrary to what DiLuzio told me, that sign decorated her doorway at different times of the year, and not just for a day or two.

What she told me is inaccurate, to put it kindly.

You own views are appreciated, especially if they differ from mine. But remember, commenting is a privilege, not a right. I will delete personal attacks or off-topic remarks at my discretion. Comments that play into the tribalism that has consumed this nation will be declined. So will comments alleging voter fraud unless backed up by concrete evidence. If you attack someone personally, I expect you to identify yourself. I will delete criticisms of my comment policy, vulgarities, cut-and-paste jobs from other sources and any suggestion of violence towards anyone. I will also delete sweeping generalizations about mainstream parties or ideologies, i.e. identity politics. My decisions on these matters are made on a case by case basis, and may be affected by my mood that day, my access to the blog at the time the comment was made or other information that isn’t readily apparent.