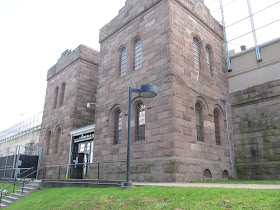 Last week, I told you about Executive John Brown's secret plan for a new jail. Cost is estimated at $128-132 million. This would mean a tax increase of 60-70%. This heavy financial toll, combined with the widespread unpopularity of jails, is why Brown and County Council Republicans have suddenly become tight-lipped. They'll surprise you about this after the election. Of course, by then it will be too late for you to do anything except pay more taxes.

If you own one of those half million dollar McMansions at Eagles Landing, your property values may soon be taking a nosedive. That's because Northampton County is looking at the Gracedale campus for a new jail.


Mr. Christenson explained that he believes the valley area near Gracedale would be a great location for a new jail, and he was told a longer than necessary sewer line was installed in the past. [Corrections] Director [Dan] Keen said a site selection has not been discussed from [sic] John Brown, but we have had a group in the jail doing studies to determine exactly what we need. Director Keen said [the current] facility costs us about $115 per day, per inmate. A new facility costs about $67 per day, per inmate. [Prison Advisory Board member Ed] Boscola asked if a new jail would cut out [sic] operating costs in half. Director Keen explained it wouldn't necessarily work out that way because of the need for more officers, based on a staffing analysis. Mr.Christenson asked how much overtime we pay. Director Keen explained the Union Contract dictates we have 1.5 million right off the bat each year in overtime due to the schedule. Mr. Boscola aksed if DLR [a prison architect hired by Executive John Brown] would do a financial analysis, staffing analysis, etc. and Director Keen stated yes. Director Keen said they are looking at it from 3 angles and will provide a report when they are done. Mr. Christenson offered the board's assistance when the time is right.

In September 2016, Keen gave a presentation to Northampton County Council in which he advocated for for a new jail. At that time the jail census was 732 inmates, and 117 of them were women.

In the summer, as temperatures rise, so does the jail population. But at the July 25 prison advisory board, the inmate population had gone down by 61 inmates. The census dropped to 671 inmates, and 122 of them were women.

Rather than deciding where a new jail should be located, the question that really needs to be answered is whether one is needed at all. If the census is going down, then talk of a new jail is premature.
Bernie O'Hare at 9/27/2017 12:00:00 AM
Share